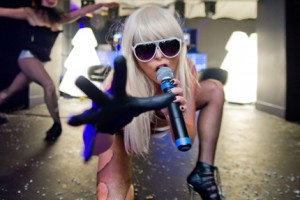 Victoria Cluskey has been performing as Maybe Gaga since 2010, travelling worldwide…. from Russia (numerous times) to Greece, Italy, France, Spain (to name a few) plus.. ALL OVER the UK.

She’s so convincing that many times people have asked whether she was miming!!!

The show is as bold and outrageous as the real Lady Gaga’s, and comes in various formats.  Taking songs from all her albums and films!!

Also available as a ‘lookalike’ for walkabouts or just to add a bit of ‘Gaga Monster Madness’ to your party…..even stage a publicity stunt (check out what she got up to in Belfast!)

‘A star is born this way’ this is one show that you really do not want to miss… book now to avoid disappointment!

Some clients have included…

Untold Universities, clubs, holiday parks and venues up and down the country

Maybe Gaga adapts her show to each client. Whether it be an ‘authentic’ outrageous Gaga or a toned down Gaga for a childs party, she never fails to deliver an awesome show.

Show can be anything from 20 minutes to a full on 2 and a half hour spectacular!